You are here: Home / Events / Celebration of speed
PreviousNext
12

We created the Celebration of Speed event in recognition of the Goodwood Festival of Speed, which is a highlight of the sporting calendar. A black tie event for 300 guests to celebrate motor racing, in the first two years it has attracted leading figures from the sport including Kenny Brack and James Toseland as well as iconic cars and bikes. In the first year we had James Hunt’s Hesketh 308 in which he won his first Grand Prix, in the ballroom. Hosted for two years now by the ‘Queen of the Pit Lane’ Suzi Perry, it has quickly become established as an important and popular event in its own right.

We created the event, the identity, the collateral and the finishing touches. We marketed the evening and engaged the sponsors including Liberty Leasing, Burrells, Tag Heuer, Berry Bros & Rudd, Hampshire Life, St James’s Place and FOPE.

The evening was in aid of the Hampshire & Isle of Wight Air Ambulance and included interactive fund raising games, a charity auction conducted by the BBC’s Charlie Ross, a silent auction of sporting memorabilia and experiences and a raffle of luxury prizes. Everyone was given a chance to record their fastest lap on our racing simulators and compete for the Celebration of Speed Cup and each place had a box of miniature chocolate racing cars from the Beaulieu Chocolate Studio.

“ We were delighted to sponsor A Celebration of Speed and with the outcome. It really was a fabulous evening, beautifully presented with the attention to detail unlike any event we have ever attended or supported. The profile of guest is ideal for our business and we are delighted to be sponsoring the event for a third year in 2019.” 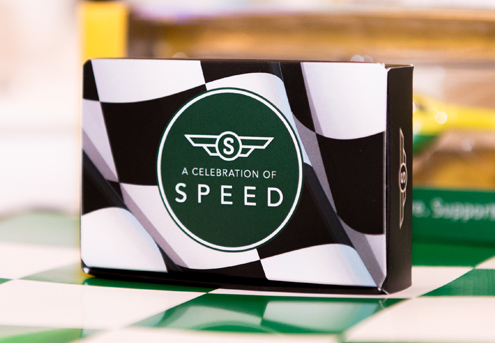